Bruce W. Tuckman is a respected educational Psychologist who first described the (then) four stages of group development in 1965, soon after leaving Princeton.  Looking at the behavior of small groups in a variety of environments, he recognized the distinct phases they go through, and suggested they need to experience all four stages before they achieve maximum effectiveness. He refined and developed the model in 1977 (in conjunction with Mary-Ann Jensen) with the addition of a fifth stage, which he called adjourning. Since then, others have attempted to adapt and extend the model, although sometimes with more of an eye on rhyme than reason.

Some experts think Tuckman's model is irrelevant in today's fast-paced business world, where highly specialized teams are often formed "on the fly" by people who don't even know each other's names.  Far from that, though, we still see people going through the stages Tuckman described, albeit at a different, much more rapid pace.  Especially in work environments where we must "team" (verb) rather than simply "be a team" the Forming, Storming, Norming and Performing stages of development apply all the more.

In the forming stage, the team actually becomes a reality.  The individual’s behavior is driven by a desire to be accepted and avoid controversy or conflict. Serious issues and feelings are avoided, and people focus on being busy with routines, such as team organization, when to meet, and so on. But individuals are also gathering information and impressions – about each other and about the scope of the task and how to approach it.  Here is where individuals should learn to identify and confront their impression management strategies, ask questions, and take risks, setting the tone for a high-performance team. 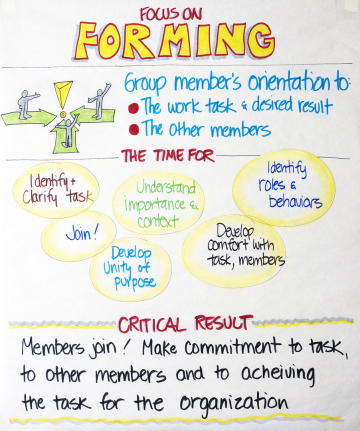 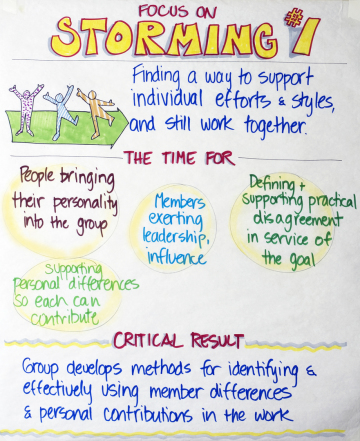 Honeymoons don’t last forever.  Every group eventually enters the storming stage in which different ideas compete for consideration. Individuals who, only last week, thought working on this team was going to be a breeze, find themselves locked together in a brutal conflict over ideas they hold dear, with people who are “oh, so very different than they.”  The team addresses issues such as what problems they are really supposed to solve, how they will function independently and together and what leadership model they will accept. Team members open up to each other and confront each other’s ideas and perspectives.  In some cases, storming can be resolved quickly. In others, the team  never leaves this stage. 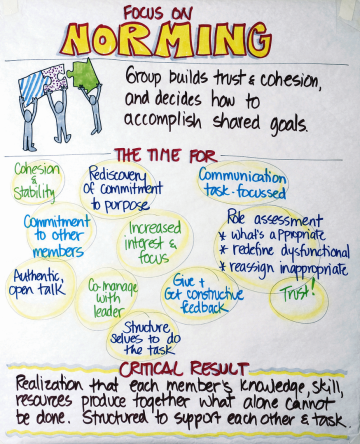 As the team moves forward  they eventually sort out which issues are important enough to expend the energy to resolve, and which are simply matters of personal preference and need to be left alone.  Here the team manages to take on one goal at a time and come to a plan for accomplishment. Some may have to give up their own ideas and agree with others in order to make the team work. In this stage, all the team members take the responsibility and have the ambition to work for the success of the goals of the team. It is in this stage that the most work gets done. After the storming stage, the ability to simply sit down as a group and solve some problems is a refreshing change, and work that has to be done is preferable to digging up more issues to resolve. 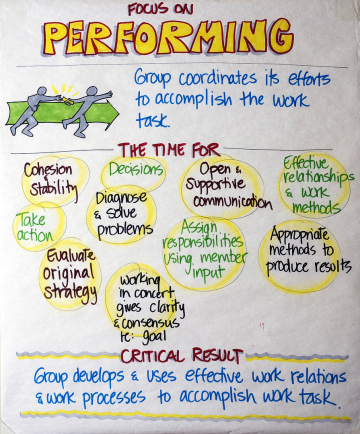 While it is possible for all teams to reach the performing stage, not all do. Teams that do make the leap to this higher level find themselves able to function as a unit as they find ways to get the job done smoothly and effectively without inappropriate conflict or the need for much external supervisory intervention. Team members have become interdependent. This means that they see themselves again as individuals, but now they define their individuality in terms that include the team’s goals and core values.  By this time, they are motivated and knowledgeable, with competencies that surpass what they had when they began. The team is now competent, autonomous and able to handle its own decision-making process with little supervision.

Make Donations to the Banyan Group Using the Donate Button Below

Thank You for Supporting

All Gifts are Tax Deductible