Why Banyan?  What's That About? 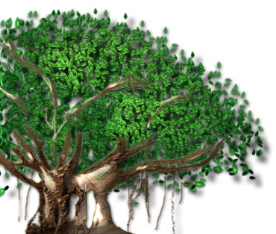 People on every continent revere the stalwart banyan tree for its ancient stature and ability to persevere through time. Beginning as a small sapling, the banyan eventually becomes a tightly knit community of trees, each standing on its own, and yet, all part of the larger root network. Outward from the central trunk, new branches emerge and grow, eventually touching ground and then developing their own individual root systems, bringing new resources and nourishment to themselves and, ultimately, to the whole network as well.  As the system expands, covering new territory, each individual branch is called upon to support the central system while developing its own root network.  The banyan is, though composed of individual trees, an organic community that is self-sustaining, self-limiting, self-initiating and multi-generational. The metaphor should be clear.  The banyan tree represents a natural model, not only for our own development as an organization, but also for how we hope to help individuals, families and organizations develop, stand and thrive in the fast-paced, ever-changing world of the 21st Century.

The threefold mission of The Banyan Group is:

Make Donations to the Banyan Group Using the Donate Button Below

Thank You for Supporting

All Gifts are Tax Deductible